The New Normal is a four-part series that explores some of the ways our lives have changed as a consequence of Covid-19. As we edge towards a return to our familiar patterns of life, we are beginning to understand that our lives have changed forever, but not necessarily for the worse. Part 4 explores the changing nature of the kiss and the digital transmission of love in the midst of a pandemic. The kiss reaches out to us. It welcomes and farewells, congratulates and commiserates. It speaks in all voices, but the language it speaks most fluently is the language of love, the dialect of desire. It's familiar tongue is the amorous kiss of the lover.

"Thus with a kiss I die." Shakespeare! So dramatic, and forever working that life and death angle.

Death was his go-to metaphor when he wanted to raise the dramatic tension a notch or two, but because he was a poet, he often imagined death as a type of ecstasy.

Even in his worlds of murder, mayhem and bloody betrayal, the sublime beauty of the lover's kiss was something to just die for.

"Seal with a righteous kiss the deal I have made with death forever," says Romeo to Juliet.

We have absorbed this manner of speaking, so in the midst of social distancing we might be "dying" to meet our lover, or somewhat more grimly, "kill" for the chance to embrace them.

There's absolutely nothing new about the notion that kissing has fatal potential. Poets and songwriters have been banging on about it forever. The killing kiss is a dagger to our heart.

Finally I will drink life from your lips and wake up from this everlasting sleep.

The "kiss of death" is most famously embodied in the Betrayal of Christ, in which the rogue disciple, Judas, identified Jesus to his persecutors by kissing him in public and picking up 30 pieces of silver for his trouble. The "Judas kiss" was then a brutal act of betrayal disguised as an act of friendship.

Apparently, the Mafia was particularly taken by this idea. Sometimes called the Sicilian kiss of death, a mob boss would mark a "rat" with a kiss before having him murdered. Remember Al Pacino as Michael Corleone kissing his brother Fredo in Godfather II. 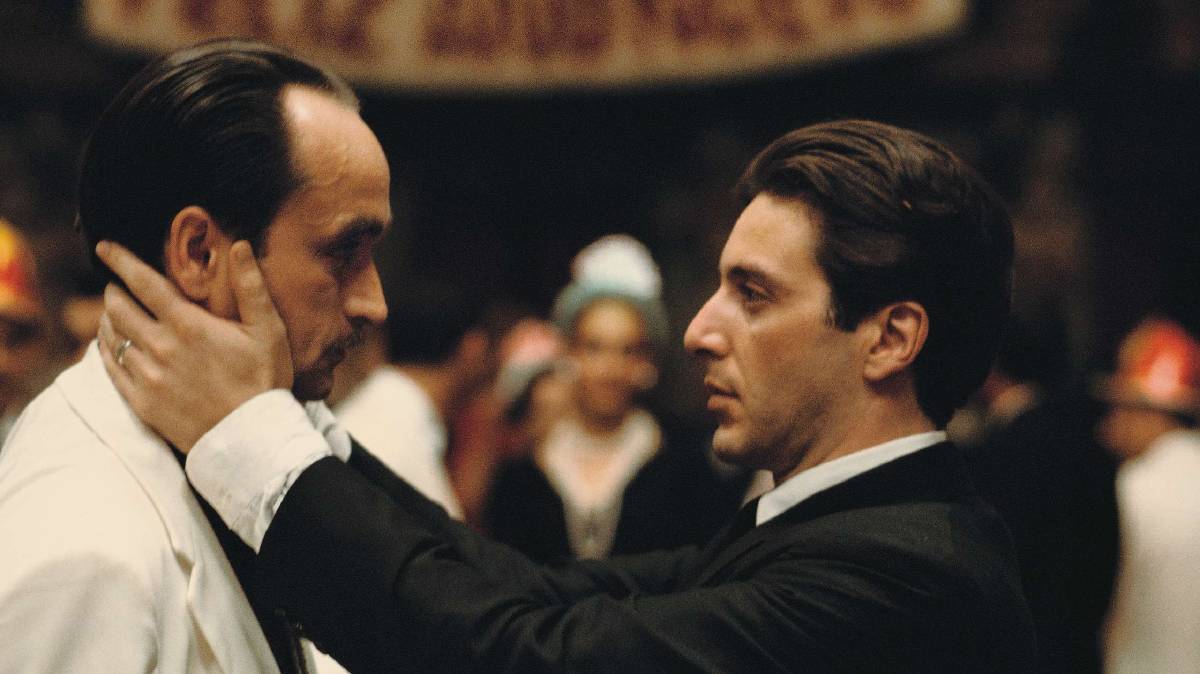 Michael Corleone (Al Pacino) about to give his brother Fredo the 'kiss of death' in Godfather II.

Yet despite the theatrical warnings of the fatal kiss, this act, which is so intimately linked with love and desire and the consummation of our emotions, has been all but disregarded by politicians and health experts when they ask us to observe the protocols of social distancing.

Maybe I've missed the public warnings, but I can't remember the prime minister or the premier or the chief health expert actually saying, "and of course, kissing is out of the question."

Maybe it is so obvious a form of virus transmission that no one felt the need to say "kissing can be a real killer".

Kissing has had its bad press in the past.

However, the great "age of kissing" collapsed and was replaced by other gestures, such as bows, curtsies, handshakes and tipping one's hat.

A poor substitute you might think. Guess why it lost popularity? The Great Plague of 1665! Isn't that interesting? Fear of infection cooled down the desire to engage in kissing of all types, from the humble peck on the cheek to full blown, lusty exploration of the depths of the divine.

But the kiss isn't always fatal. Sometimes it can save us.

The idea of the restorative power of true love's kiss is also part of our culture, particularly in the modern reworking of fables and fairy tales.

We all know that a prince's kiss could break the spell Sleeping Beauty and Snow White were under and bring them out of their death-like slumbers. And if the right princess took a chance and kissed a frog, a handsome prince might leap straight to her heart.

And in the real world, when you are pulled from the surf half drowned and bedraggled, what better way to be resuscitated than with the "kiss of life" from a lusty life saver. A lot of the media attention on personal relationships during lockdown restrictions has been fairly negative, and usually goes something like this: "I love my husband, but he is driving me mad".

But not everybody lives with their romantic attachment, and for millions of people the separation from their lover, boyfriend, girlfriend is a terrible body blow.

Consider also the lonely hearts who have just struck up a friendship jogging on adjacent treadmills at the gym. The gym is closed and that contact, that welcome, that smile, that excitement is shut down too.

But the great thing about human beings is their ability to adapt to their circumstances.

The digital age is often condemned for its depersonalised, dehumanising characteristics, but for lovers, for those in need of intimacy and human connection, which is most of us, the only limitation for those with a mobile phone, is their imagination.

As Jennifer Power from La Trobe University's Australian Research Centre in Sex, Health and Society points out, we have the predilection to say things when texting that we would not usually say face to face.

"Texting emboldens us, allows us to speak more openly about our feelings and our desires. Writing something taps into a different part of people," Dr Power says.

"People do put time into crafting messages and thinking about how those messages will be received."

A text is somewhere between a face-to-face conversation and a letter. Some people send long texts, but generally it's about short exchanges, and when it's amorous, it has the potential to be a call and response love letter, a teasing, intimate, flirtatious exchange, with the added risk of misunderstanding because there are no visual clues.

And that exchange can have all the excitement and apprehension of a face-to-face interaction.

There is also an element of control about texting, which can be very important for young people especially, and I suppose I'm thinking primarily of young girls here.

The hooking-up scenario at a late-night dance club leading to an alcohol-infused car park grapple can be more the consequence of societal pressure than legitimate desire. But the "here's my number, text me" solution allows for some time, space and vetting of potential lovers.

In a lockdown situation it becomes more poignant, and suitors (we'll call them that) might have to lift their game and show some wit and intelligence.

"Welcome back to courtship, Brad

"Welcome back to talking to a girl weeks prior to meeting

"We bout to get Jane Austen up in here

In a pandemic situation that seems "out of control", being "in control" is the psychological key.

If we choose to send someone a photo of us, we are in control of that message. There may be peer group pressure for younger people or expectations on a dating app, but in general, the decision about what you show, how much flesh you bare, is yours.

The mobile phone camera is a good one, you can edit, crop, alter the light and colour, be as kind to yourself as you can, and be as artistic as you are able.

The receiver might reply: "it is not just that this photo you have sent me is beautiful, it is also that you have given me something that is a part of you, that is fragile and trusting, and I find myself smiling at my phone, which feels a little ridiculous".

The Zoom, Facetime, Skype encounter is much the same, though clearly we are stepping up the intensity a degree or two.

This medium offers us the potential for the "virtual kiss", the subtle unbuttoning of shyness, the tongue moistens the lips in a circular motion and the face leans forward into the camera and sends a message as evocative as anything a physical encounter can manage.

We are not amateurs in this domain, because the phone, ipad or laptop is also a screen, and we are merely stepping into a cinematic culture that we are intimately familiar with.

We know the look of love, the lowered light, the eyes that entrap. We play the starring roles in our own movies, and the glamour, romance and seduction of the silver screen is a script we have read from a thousand times.

The digital is not a substitute for a tactile life, it is not even virtual, it is the messenger and the medium, it is as good, bad, tacky and brilliant, unimaginative and inspirational as we make it, and as we are.

Read more of The New Normal

Baking bread in an age of isolation

Life cycle: To flatten a curve you need gears

Healing breath: yoga and meditation in our era of anxiety

This story The kiss: new transmissions of contagious love first appeared on The Canberra Times.