John* has recounted the denial, grief and trauma he experienced growing up in Tasmania as a homosexual man in a Christian church, including an exorcism he was forced to partake in.

He grew up attending the church and struggled with an internal battle regarding his sexuality for about 20 years due to the sexual orientation and gender identity (SOGI) conversion practices he experienced.

It all began after he spoke to his minister in his 20s and was put in touch with a conversion practice, where the leader was gay but had "changed" and was in a heterosexual marriage.

"He reassured me there's a lot of people out there just like me. And that things could be done to support me, help me," he said.

"They're up the front saying change is possible but it's just out of reach.

"The internal side is that it's a lot of denial. There is deep, deep conflict, because you're well aware you are meant to tick boxes of boy meets girl, they fall in love, get married, have kids. For me, I just knew I couldn't tick the boxes."

For the next 20 years he struggled with his identity. John said his path was due to a huge power imbalance and him feeling vulnerable, threatened and guilty.

Anonymous donors paid to send him to numerous SOGI conferences interstate, before he was introduced to a prayer group.

"The group still exists in Tasmania and I met with them three times. The first time I had nine hours of prayer ministry that included an exorcism. My second was five, and my last was two-and-a-half hours," he said.

"I did experience an exorcism which was terrifying to be told, 'this is what's going on'. Then afterwards when you're not healed, there's a lot of blame and 'oh I don't have enough faith', or 'does God even love me'."

The middle-aged man said in 2018 he reached a crisis point and decided his internal struggle had to end.

"You feel a lot of shame, you feel worthless. Plus, there's a lot of blame that's going on, like I'm at fault or there's something wrong with me," he said.

"There's this danger that if you know about my secret, or who I really am, they will turn their back on me and leave me. That sense of abandonment and rejection, that runs pretty deep as well."

Conversion practices aim to change, suppress or eradicate the SOGI of a person. This is why John is one of many pushing for the Tasmanian Government to ban the practice.

What are conversion practices?

They arise from an assumption that LGBTQIA+ identities are the result of physical or psychological dysfunction - a view that is not supported by scientific, health or medical experts.

They are commonly motivated by:

It include statements or acts suggesting a person's SOGI is wrong, immoral, broken or in need of fixing. It also involves non-consensual physically abusive acts. These include:

An example would be a religious newspaper sent to residents in Hobart in October, which featured a story where a gay man and woman had been "cured" and got married. 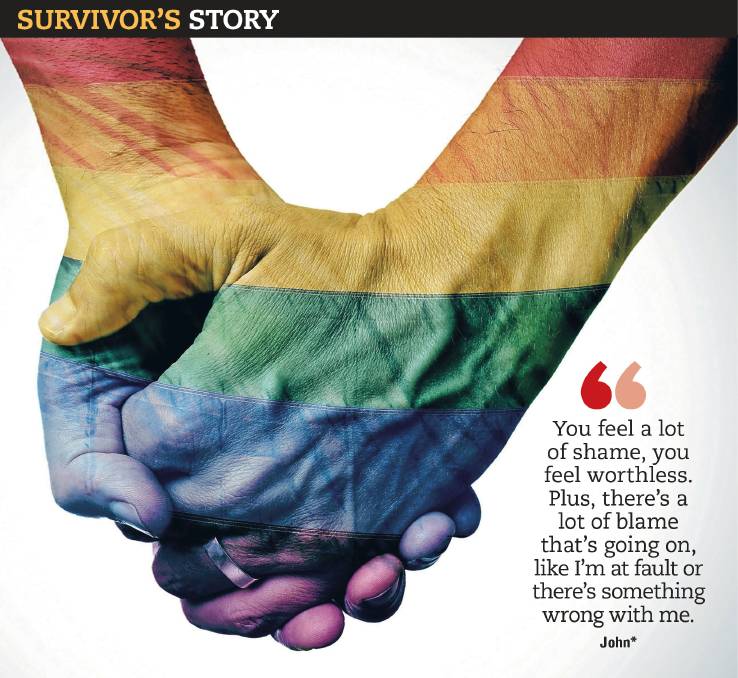 Why is the TLRI conducting a report?

The Tasmanian Law Reform Institute issues paper is investigating whether, and how, Tasmanian law should be reformed in response to evidence about the harm caused by SOGI conversion practices.

TLRI found a range of existing laws could potentially apply to some SOGI conversion practices. However, they appeared to be incomplete and limited.

Data on conversion practices is unknown in Tasmania. However, in 2018 the Human Rights Law Centre found at least 10 organisations publicly advertised practices in Australia and New Zealand.

It also suggested prevalence studies in the United Kingdom provided a fair comparison for likely prevalence in Australia. Because of similar demographic conditions with respect to religious observance and LGBTQIA+ people. It estimated up to 10 per cent of Australians may be exposed to some form of SOGI conversion practices.

"Submissions to our community consultation indicate that there are, indeed, various forms of conversion practices occurring within Tasmania," he said.

"Ultimately however questions about prevalence are likely to be misleading in the context of law reform. If we know certain harmful acts can be perpetrated against vulnerable groups who do exist in the community then that should be enough."

A final report with recommendations is scheduled to be released in March.

Why is it harmful?

Both the Australian Medical Association and the Australian Psychological Society oppose the use of conversion practices. With other peak medical and psychological bodies worldwide considering it unscientific, ineffective and dangerous.

A 2020 study, Lifetime Exposure to Conversion Therapy and Psychosocial Health Among Midlife and Older Adult Men Who Have Sex With Men, concluded people who had undergone conversion practices reported conditions like depression, internalised homophobia and post-traumatic stress disorder at a rate 2-2.5 times higher than LGBTQIA+ people who had not been subject to such practices.

Victoria was the latest to ban conversion practices earlier this month. With two other jurisdictions, Queensland and the Australian Capital Territory, banning the practice last year.

Queensland adopted a narrower definition than the ACT and Victoria, as it does not prohibit harmful practices in religious settings, only health care settings.

Victoria's bill explicitly bans carrying out a religious practice, including a prayer-based practice, a deliverance practice or an exorcism if intended to change or suppress an individual's SOGI.

A pastor for Launceston's Free Reformed Church and a Hobart 'life group leader' have made public submissions to the TLRI admitting they have carried out SOGI conversion practices and they should not be banned.

Former Rainbow Labor Tasmania president and LGBTQIA+ advocate Ben Dudman said as a Christian himself he failed to see how banning it would affect faith-based organisations.

"Religion exists to provide spiritual support and community, not to engage in faux medical practices and intervention," he said.

"Faith-based organisations should not worry about 'fixing' LGBTQIA+ people because we aren't 'broken'."

Mr Dudman said it must be banned to ensure no one could be harmed by the dangerous practice.

"It is a pseudoscientific practice that is not backed by medical science or contemporary societal values," he said.

"By not banning conversion therapy practices in Tasmania we are telling LGBTQIA+ Tasmanians that their inherent existence is wrong and can be changed. You cannot change someone's sexuality, that should be a well-accepted and understood fact in 2021."

Earlier this month, Equality Tasmania Rodney Croome said at least six Tasmanian survivors of conversion practices made submissions to the inquiry, pushing for it to be banned.

Attorney-General Elise Archer said the government considered matters for law reviews on a regular basis and was open to meeting with survivors to discuss their experiences.

*Name has been changed.

This story 'You feel a lot of shame, you feel worthless': gay conversion practice survivor first appeared on The Examiner.