Mel Gibson is back in Boss Level. But it seems he still hasn't made it fully back to, well, boss level. He's third billed on the poster I saw, behind Naomi Watts in second place and Frank Grillo as numero uno. Grillo has been a busy actor for many years. But he's hardly an established star, unlike Watts and Gibson.

Gibson's lower billing might reflect the size of his role - I haven't seen the film - but major stars can command higher, above the title, billing even if their roles aren't the biggest. In Superman (1978), Marlon Brando was billed first (and paid a then-huge amount of money for his brief performance as Jor-El), Gene Hackman as villain Lex Luthor was second, and Christopher Reeve - the newbie who played the title role - was third. The Brando mystique still counted for something and he'd made a comeback - and won an Oscar - a few years earlier in The Godfather after a string of duds.

Perhaps Gibson's bargaining position still isn't the best, despite years having gone by since his well-publicised scandals (we won't rehash them here: if you've forgotten, try Google). As director he's done pretty well: The Passion of the Christ was a big hit and his fine 2016 war film Hacksaw Ridge won two Oscars and was nominated for others including best director and best picture. But onscreen, although he's kept working, he's had less luck in having another big hit to help reinstate him: the last film I saw him in was Fatman, an awful Christmas movie. He played the lead and was top billed, but it was hardly an honour.

His situation might be a combination of lingering ill-will and the movies he's acted in not making much impact - and with Boss Level, the fact that its studio, Entertainment Studios Motion Pictures, bought the film in 2018, didn't release it in 2019, and finally sold it to Hulu, wouldn't have helped.

Gibson might be on the verge of becoming one of those faded names whose presence adds some lustre to a movie, especially one not put out by a major studio, but not enough to ensure he is top billed.

By the 1970s, the sort of thing that seems to be happening to Gibson was happening to a lot of veteran movie stars and character actors, though not all: veterans like Charlton Heston and Robert Mitchum were still getting leads and top billing in major films.

Disaster movies in search of all-star casts of familiar faces to kill off or spare provided employment for many. The Poseidon Adventure's cast included Ernest Borgnine, Shelley Winters, Red Buttons and Jack Albertson - talented Oscar winners all, if not necessarily huge movie stars - as well as Gene Hackman, who had just become big after his Oscar for The French Connection.

The Towering Inferno had even bigger veteran star names - among them Fred Astaire and Oscar winner Jennifer Jones. Football great turned actor OJ Simpson was also in the cast: he would later self-destruct even more spectacularly than Gibson (again, you can look it up).

Inferno had an interesting story behind its above-the-title billing. William Holden wanted top billing but no longer wielded the star power he had when he won an Oscar for Stalag 17 two decades earlier. Steve McQueen and Paul Newman battled it out for prime position on the poster. After what must have been a negotiation as delicate as any brokered by the UN, McQueen was placed first on the left, but Newman, who came second from the left, was one line above, so either could be said to be first, depending - literally - on how you looked at it. Holden was third, on the same line as McQueen, and Faye Dunaway, then in her prime, was fourth and one line down (ah, that good old Hollywood sexism). Astaire, Jones and others got small headshots and alphabetical order listing under the title.

Producer Art Linson told the hilarious story of how the late 1990s film The Edge was put together. Among the issues was casting: Harrison Ford was offered one of the lead roles, since his presence would guarantee a start date for production.

Ford, Dustin Hoffman and Robert De Niro all passed but eventually Alec Baldwin came on board and so did Anthony Hopkins. But Hopkins - despite his Academy Award for The Silence of the Lambs - was not considered a big box-office draw like, say, Tom Hanks, and Baldwin was seen as being past his prime, so Linson came up with a "one plus one equals three" theory: the combined star power of Hopkins and Baldwin equalled that of one Ford. 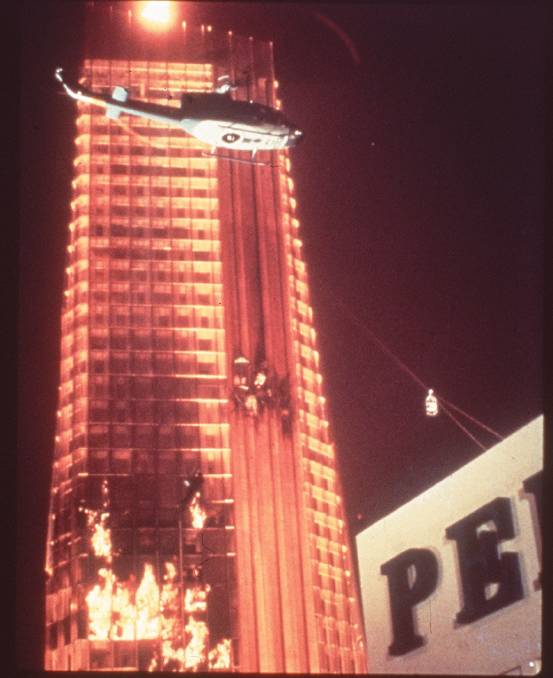 The stars fought over billing but spectacle ruled in The Towering Inferno (1974). Picture: Supplied

The studio was dubious but the film - a thriller written by David Mamet (The Untouchables) and directed by Lee Tamahori (Once Were Warriors) - got the go-ahead. The film lost money. Baldwin found new life on TV (as many stars did, and do) but Hopkins kept going strong in movies. And Hopkins got first billing on posters though some of them had Baldwin's face on the left - this sometimes happens, presumably as another way to massage egos.

There are other ways to give actors special billing that are sometimes combined - putting their name in a box, the employment of "with" or "and" at the end of a sequence of credits, naming their character ("and Ruth Gordon as Ma" was the last credit onscreen in the main titles as well as on the poster for Every Which Way But Loose: Clint Eastwood on the poster got sole over-the-title billing in a phrase that included the title as a sentence: "Clint Eastwood will turn you...").

There are even "guest star" and "special guest star" billings which make sense for an ongoing TV show but not a one-off event like a movie.

Woody Allen's films usually have the simplest credits system: alphabetical order for everyone in the cast. When he was in them that meant he usually (but not necessarily) got first billing. Some stars might be miffed with the system but at least it's simple, consistent and open.

This story When stars jockey for top billing first appeared on The Canberra Times.