COVID might have sent planning hearings online but the divisions in the community between those opposed to and those who support coal mine expansions in the Upper Hunter remain.

Where once the mine's proponents and their supporters would be seated in these hearings in their high-vis clothing today through the technology of a virtual hearing its more to do with actually hearing them speak and seeing their slides than the clothing they wear.

You could say mining companies and the Department of Planning, Industry and Environment (DPIE) remain upbeat and optimistic about the future of coal mining in our region despite global headwinds including last year's significant price slump and the continuing rise of renewable energy options that are cheaper than burning coal.

An example of the changes now underway is announcement today by Energy Australia that they are bringing forward the closure date of Victoria's Yallourn coal-fired power station by four years, to 2028, and planning to build the world's biggest battery in the same region.

Closer to home large battery storage facilities are planned for land adjacent to Liddell power station and in the Kurri Economic Zone. As well TransGrid is currently planning to build new transmission lines from the Central West through the Upper Hunter to connect the Orana renewable energy zone to our region and beyond. 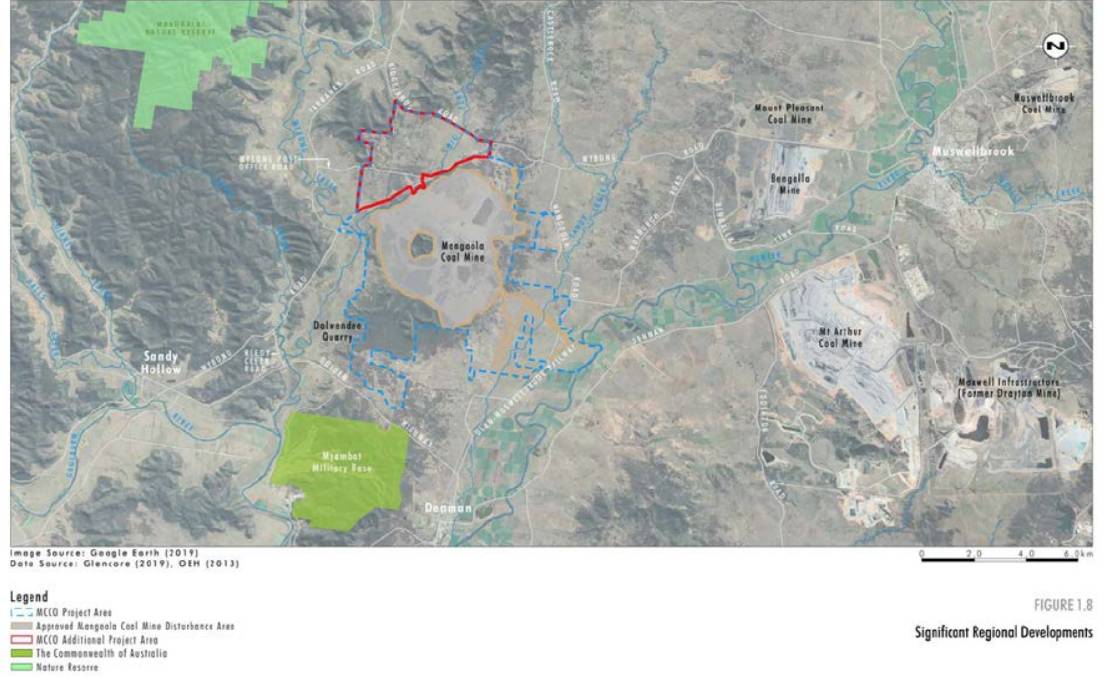 Against this backdrop last week the Independent Planning Commission (IPC) held a public hearing into Glencore's proposed 13 months extension for its Mangoola open cut mine near Muswellbrook.

Matthew Sprott, DPIE, Director of Resource Assessments told the IPC, by extending mining to the north of the existing operations Glencore would recover an additional 52 million tonnes of coal through the development of a new satellite pit, which would be operated concurrently with the existing operations over an eight-year period.

"With the absence of this pit, Glencore has identified that the coal reserves in the current mine would expire in about 2025. So by operating the existing Mangoola Mine and the new extended area concurrently, they could see the operation continue through to the end of 2030," he said.

"It would provide 145 construction jobs and would provide continuing employment for the existing 400 staff at the mine, as well as 80 additional operational jobs once the northern extension area is up and running at full capacity.

He added Glencore has sought to manage these impacts through the project design, including using existing terrain which includes a 100 to 150-metre tall ridgeline to the north of the site, which helps to attenuate minimising impacts on receivers beyond that ridge.

The extension also involves the clearing of 570 hectares of vegetation within the proposed disturbance area, comprising around about 60 per cent woodland and forest species, and the remaining areas are currently derived native grasslands. Glencore has proposed a comprehensive biodiversity offset strategy, including a number of landbased offset locations to offset these impacts on the proposal.

According to Mr Sprott the mine's extension would deliver a net economic benefit to NSW of over $400 million and royalties to the state of $130 million.

For those opposed to the extension, including residents of Wybong, the economics of the development don't stack up and the impacts from air and noise pollution, damage to waterways and a larger final void being left once mining finishes is simply not worth giving this project the green light.

Hunter Thoroughbred Breeders Association president Cameron Collins was scathing in his presentation describing how the Upper Hunter community has lost all faith in the planning process.

"I am here to ask you (IPC) to stop the destruction imposed by this mine on the Wybong and our Upper Hunter communities," he said.

"In my firsthand experience of observing almost 30 years of mining in this region, this mine has precipitated a unique milestone double; one achieved by no other mine in the Upper Hunter.

"Firstly, an apology from the local mayor in 2012 for previously supporting this mine; and secondly, a forthright objection by the Muswellbrook Council to this specific proposal.

"In his apology, Mr Rush stated that the mine had cost the Wybong community too much. More than half the Wybong Valley's population, more than 400 people have left because property buy-outs. The Mangoola Mine has opened up a new front in the middle of productive agricultural land in an area identified as a critical biodiversity link between the Wollemi National Park and the Great Eastern Ranges. " 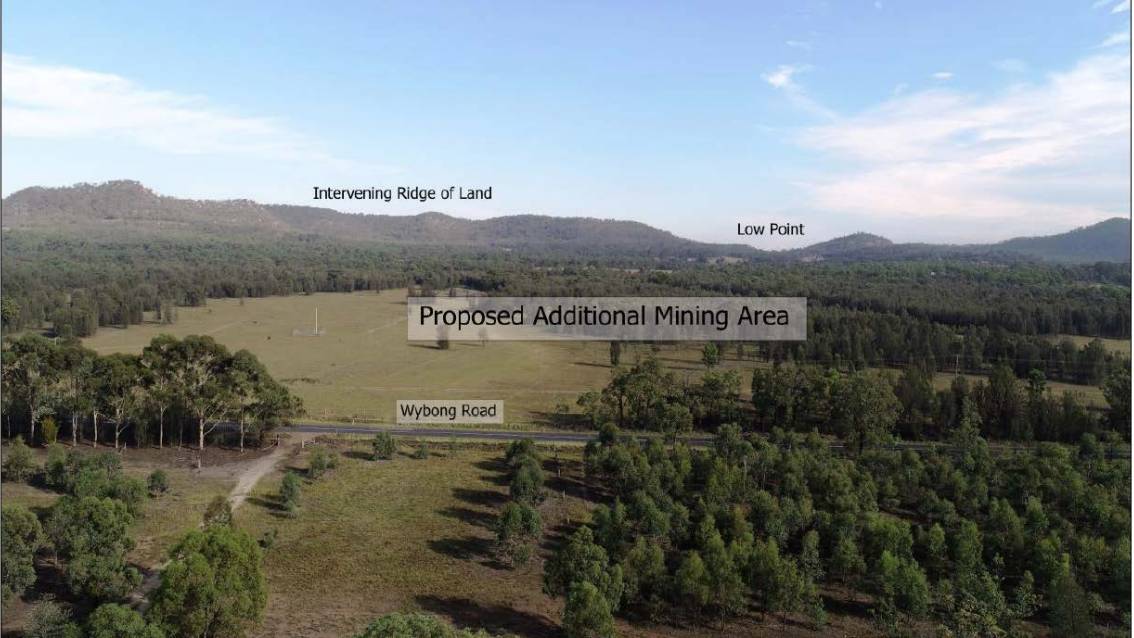 "The council has declined or not responded to numerous invitations from Mangoola and our project team over the last two years to discuss our project," he said.

"In 2019, Mangoola's total economic contribution to the Muswellbrook LGA was $335 million."

Despite the hundreds of millions of economic benefits Joscelyn McGarity from Environmental Justice Australia said Doctors for the Environment Australia, which is a not for a profit organisation, made up of doctors and specialists across Australia, using the World Health Organisation figures, calculated that over the last five years pollution from PM10 alone has caused at least 160 more deaths in the Upper Hunter than would otherwise have occurred.

"And I think that that's - this sort of information hasn't been presented in the applicant's social impact assessment nor their air quality impacts assessment either," she said.

Speaking on behalf of Wybong residents, Angela Van Den Heuvel from the Wybong Concerned Landholders Group said the group has been unable to have any material impact on the outcome and now fear that they will only be perceived as whingers as their concerns remain unresolved.

"How do 40 dramatically affected people have any gravitas in the approval process when the NSW seem blinded by the proposed benefit of $129 million and have no desire to engage," she told the IPC.

In reference to the Mangoola 2018 annual review shows the comparison of predicted water usage to actual water usage during 2018. The EIS for the 2014 modification 6 application predicts a high water demand of 889 megalitres.

"Actual water usage in 2018 was recorded as 3142 megalitres. This is an increased water intake of 2253 megalitres, which is 250 per cent above the mine worst case scenario predictions.

"Do we blame the 250 per cent increase in water usage on poor initial modelling and predictions or on a changing climate and longer, deeper dry periods. The impact is real."

Commenting on the final voids. she said is this truly the legacy we want to leave for our children.

The assessment supports a project that disturbs another 600 hectares of land, then proposes to increase the current approved final void from 52 hectares in area to two voids with a total proposed final area of 130 hectares, she said.

"The newly proposed northern void would be 82 hectares and in close proximity to landholders. This is a 250 per cent increase in the area to be left once mining ceases," she said.

"The wellness of a very small group of people may seem so unimportant and even irrelevant to a project with such seemingly huge economic benefit to the region, the government and Mangoola Coal. To us we are not just a small group of people. We are neighbours, friends and family. We categorically ask that you don't support the approval of this project."