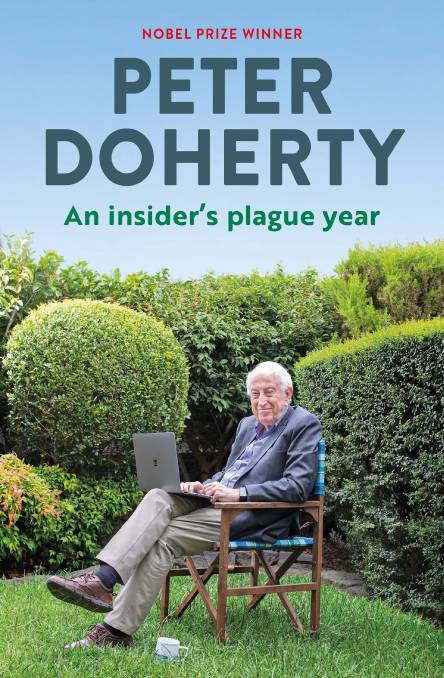 Peter Doherty knows his stuff, and is a pleasure to read. Picture: Cover of An Insider's Plague Year.

I leapt at the chance to review a book about coronavirus written by someone who knows what they are talking about.

A Nobel Prize winner in the field of immunology, Professor Peter Doherty is undoubtedly in that category. How does the virus actually work? How does it cause us harm? How is it different from other viruses? This useful book addresses these and many other questions, and also provides a glimpse into the lives of those at the forefront of research, and wider questions of how society responds to outbreaks of disease.

There are three sections to the book. The first deals with the development of various research facilities over a number of years, mostly in Melbourne, which allowed for a coordinated response when Covid became a threat.

It was only in February 2020 that the World Health Organisation named the new disease COVID-19; doesn't it seem that we've been living with the virus approximately forever?

The last section covers a variety of topics, including the ongoing problem of climate change, alongside the outbreak of pandemics. The second section, "Setting It Straight" is by far the longest, and deals with the questions of what the virus is and how it works, in a series of short explainers.

Originally written on a weekly basis for the Doherty Institute's website, these short commentaries cover the period from the first outbreak of the disease in 2020, through to January 2021 when the book was completed.

Doherty continues to write more updates on the website, which can be accessed by anyone. This section is just what I was hoping for, explaining what a virus is, how they differ from bacteria, how they get inside us and attach themselves, and how vaccines interrupt that process, among other topics.

Natural immunity is a focus here too, and how coronavirus is not just a bad flu. After reading these pieces, I have a much better idea of what this tiny entity that has forced us into masks and isolation actually is.

There are a great many acronyms in this section. For example, the following sentence appears in the essay called "Hitting the Virus Production Factories":

It was only in February 2020 that the World Health Organisation named the new disease COVID-19; doesn't it seem that we've been living with the virus approximately forever?

And, as we've discussed previously at length, the T cell receptors (TCRs) on our SARS-CoV-2-specific CTLs are specific for one of our very own MHC class I (MCHI) glycoproteins that has an 8-12 amino acid peptide (p) derived from a SARS-CoV-2 protein bound to it.

Those with less of a fear of numbers, a greater knowledge of science than Year 11 biology, and an ability to remember acronyms, will find this section of the book easier to read than I did. There is a very useful table of commonly used abbreviations at the rear of the book, and with this, I managed to understand the points that the author made, but it stretched my abilities in ways they are not used to being stretched.

Nevertheless, it is worth the effort to work through any difficulties to glean an insight into how our bodies actually confront viruses.

There is also a beauty to some of the language here; the "cluster of differentiation" and "...monocytes, macrophages, neutrophils, basophils, and eosinophils...".

Doherty sometimes uses metaphor to explain how viruses work, and this aids greatly in understanding some difficult ideas. How the image of a birthday cake is used to illustrate how immunity works is a treat I'll leave to the reader. We find that the origin of the word "immunity" comes from immunis, meaning "without tax", as Roman soldiers who had fought in foreign wars weren't taxed, at least for a while. This is fascinating stuff!

Along the way, we get an insight into how science in the area of immunology works. The real, unwilling hero in the area of understanding viruses seems to be the mouse. Doherty becomes quite vehement in defending the necessity for animal experiments: "If anyone tells you that mouse experiments have not been, or are not know, central to advances in biomedicine, walk away. They are either deliberately ignorant, or lying."

While animal experimentation makes me uneasy, I have no qualms about having had two AstraZeneca shots. And, of course, many thousands of people in other countries are literally dying for want of access to these vaccines. Given the virus seems to have jumped from other animals, it is interesting that we rely on the mouse (as used by scientists) for ways to combat the virus.

An elegant essay, originally published in literary journal Meanjin, appears in the last section of the book, looking at what the next 80 years may bring.

Doherty argues strongly for international action on climate change. Worryingly, he states that "(w)e may look back on the current COVID-19 experience as a relatively benign trial run".

He says this not to scare the reader, but to emphasis the need to change the way we travel and to protect the environment, so as to minimise the development of new pandemics. Genetically modified organisms for use as medicines and food are touched on here, and Doherty argues that they should not be rejected out of hand, without investigation.

This Meanjin essay links back to an earlier part of the book, where he states that we are dealing with "two complex, interlinked human ecosystems - one internal to us that involves the expertise of the physician and pathologist, the other external that requires the skill sets of the epidemiologist and public health professional, and the formulation of clear and effective policy at the political level".

Countries where medical and scientific advice was sometimes ignored, notably the US under Donald Trump, are mentioned, alongside the scientists who had to sit and listen to the rejection of evidence-based solutions in favour of brain-farts (remember the bleach?)

Other well-known figures mentioned in An Insider's Plague Year include John Keats, Seamus Heaney and Tony Abbott, along with a host of scientists largely unknown to the general public.

In delving into the intricacies of how viruses work, and expanding that examination into the wider questions of what can be done about pandemics, Professor Doherty has produced an important book.

I deliberately avoided going to the Doherty Institute site for further updates as I wanted to review the book as it stands, but will definitely look at it for information on the Delta variant, which seems to have reached Canberra the week I am writing this review. There may be lighter books to read during lockdown, but few as enlightening.

This story Turning Covid inside out first appeared on The Canberra Times.