Conquering a marathon gave Claire Farrer belief she could overcome cancer too. JUSTINE McCULLAGH-BEASY sat down with the inspirational mother-of-one to discuss how she stayed calm during a health scare.

CLAIRE Farrer is preparing for her second marathon but circumstances couldn't be more different from her first eight years ago.

She has welcomed daughter Isabelle into the world and overcome a serious health scare since crossing the Melbourne Marathon finish line in 2012.

It's that experience the Purnim-based mother-of-one credits for giving her the mental strength to tackle her breast cancer diagnosis head-on. FAMILY FUN (TOP): The Farrers - Greg, Isabelle and Claire - during their holiday to Noosa in August 2018.

"In sport you learn to push your boundaries a little bit and in particular when I ran a marathon, it was so far out of my comfort zone and I felt like I really, really had to push myself," she told The Standard.

"I think you take that mindset, 'OK, I am sick but I am a strong person, I can run a marathon, so I can put up with a bit of sickness for a few months'.

"It was literally three or four months of my life. It sounds weird to compare running a marathon to having cancer but I think the mindset is similar, you just have to think you can do it and you've got to believe in yourself." LAP OF HONOUR (LEFT): Claire Farrer gives the thumbs up after completing the Melbourne Marathon in 2012.

Claire, now 44, was enjoying life on her Purnim property - 15 kilometres north of Warrnambool - with husband Greg and Isabelle, then four, when her world was thrown upside down in January 2018.

She noticed a lump on her breast.

"You just kind of know it's not normal, it's not right," Claire said.

"I went off to the doctor and then it starts escalating. The doctor sends you for this scan, that scan and the next thing you're at the surgeon and you're going to have a mastectomy.

"I had chemo afterwards and I probably had about 15 months of treatment all up." SUPPORT (BOTTOM): Claire Farrer was comforted during her first chemotherapy session in April 2018 thanks to nurse Lisa Kellett.

Claire had three months' chemotherapy and then additional treatment which required hospital visits every three weeks.

She was grateful South West Cancer Care Centre was available, ensuring she could remain close to home.

"The medical people that we have are unbelievable. You hope you never have to see them but when you do, it is so re-assuring to know we have some of the smartest brains in town treating you," Claire said.

Claire, who grew up on a farm at Hexham and went to school in Mortlake, finished treatment in July 2019. "It's interesting when you look back because you're in a cycle and just going from one appointment to the next," she said.

"It is really hard to think with any clarity with what's going on because everything is just escalating so quickly.

"I'll always remember my oncologist said to me 'you're 41, you're healthy otherwise and you're active - we can throw everything at this cancer so you shouldn't be afraid'.

"They were really reassuring words."

Planning a family holiday to Queensland gave Claire something positive to strive for.

They flew to Noosa in August 2018 after she completed her chemotherapy.

"My mental state was I wouldn't think about how sick I was, I'd think 'in six months' time I am going to be finished with all this, maybe we could go on a holiday'," she recalled.

"I'd focus on something good that was going to happen in the future." SUPPORT CREW: Claire Farrer after completing a half marathon to support Cancer Council.

She found a silver lining in her diagnosis too.

"It sounds funny when I say to people 'I was really lucky' and they're like 'you had cancer, you're probably not that lucky'," she laughed.

"But my lump was really close to the surface so I actually saw it and I'd never check my boobs, would never think to do it because you don't think it's going to happen to you.

"If it had been deeper within my breast who knows how long it would've taken for me to find it."

Those important to Claire rallied behind her too.

She was grateful her then employer Regional Wealth Plus, especially boss Steve Harris, allowed for flexible hours and was happy to see her wander through the doors whenever she felt well enough to work. Husband Greg - the pair married in 2003 - helped maintain a sense of normality on the home front.

Isabelle, whose excitable nature encouraged her mum's social media hashtag #CycloneIsabelle, was too young to understand the situation. She turns seven in November.

"She was four. If she had been eight, nine or 10 it would've been really challenging," Claire said.

"It was good for me because she was normal. Life at home was kind of normal, even though it was out of control.

"She wasn't stressed, she just thought 'mum's having a sleepover in hospital and dad's taking me to McDonald's, this is fantastic'. She was living her best life." 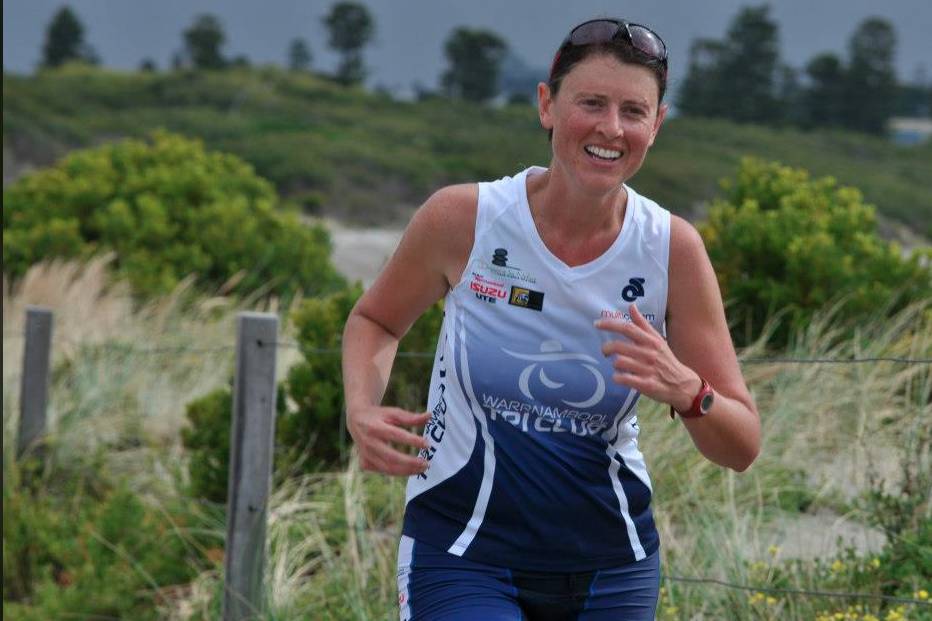 SECOND FAMILY: Claire Farrer is a past president of Warrnambool Tri Club and loves being involved.

Friends, such as Jenny Waterhouse and Ian Barnes, helped ease the pressure on the family too.

"People come out of the woodwork sometimes when you're in need. You don't have to ask for help because people are already there doing things for you," Claire said.

"It's shown us who the really important people in our lives are. They are the people who would turn up out of the blue with food or magazines and just wanted to do something to help."

Claire's warm and friendly nature made an impression on Ian when he joined Warrnambool Tri Club in 2013.

She was president at the time and made a bee-line for him when he rocked up for his first event.

"Claire to me is the lifeblood of the club, kind of like the mother-figure in a way," he said.

"I remember the first event I attended, walking up not knowing any faces, and she heard my name and straight away went 'oh, you're Ian, I saw you signed up as a member, I wanted to catch up with you'.

"And before you know it I felt I welcomed and part of the club. That all came down to Claire, the welcoming attitude she creates, it's just incredible."

For Claire, it was about repaying the club after the support Dean Picken and Travis Greening showed her when she first joined.

"Through my 20s I didn't do any exercise and it was only as I got into my late 20s I thought 'I need to be healthier and a bit more active'," she said.

"I did a lot of swimming and walking and then one day I thought 'I'll just run a little bit'. So I just ran between the light poles and built that up and I thought 'I only need to ride a bike and I can try one of these triathlons'." Claire, who now works for HR consulting company Cooper Hardiman, was on the tri club committee for eight years, only stepping aside when she was diagnosed with breast cancer.

But she remains involved and has completed two half-marathons since completing her treatment.

In July 2019 she raised more than $5000 for the Cancer Council and backed it up when she completed Run For A Cause in Ballarat in November last year.

"I am not a good runner, I am a plodder but I enjoy the feeling of going out and running five kilometres or I could run 10km if I want to," she said.

"It clears your mind. I find it really therapeutic."

Next on her list is a second marathon. In a case of mind over matter, the odds are in Claire's favour. This story Mind over matter as Claire tackled cancer head-on first appeared on The Standard.