Kylie Miller squeals mid-sentence. She's talking about her just published children's book, Heroes of Black Summer, when her laptop alerts her to an email.

"Oh my God, while I'm sitting here, I've just got an email from Australian Geographic saying they're doing another print run already," she trills.

Having any book published is exciting enough. Having a second print run less than a week after the first is electrifying. And having the opportunity to help children overcome the trauma of the Black Summer bushfires through reading a book pitched directly at them - that's food for the soul.

The fires of the Black Summer were no ordinary monster of children's imaginations, lurking under beds or in the dark spaces in wardrobes. They raged out in the open across vast parts of the continent, terrorising young and old around the clock from November 2019 through until February 2020.

Apocalyptic images flashed around the world. The boy on the boat in the gas mask under a blood red sky. The huddled, fearful crowds jammed onto the beach at Mallacoota waiting for evacuation. The wildlife in torment. The firefighters dwarfed by a tsunami of flame. The silent, blackened country after the fire had swept through. 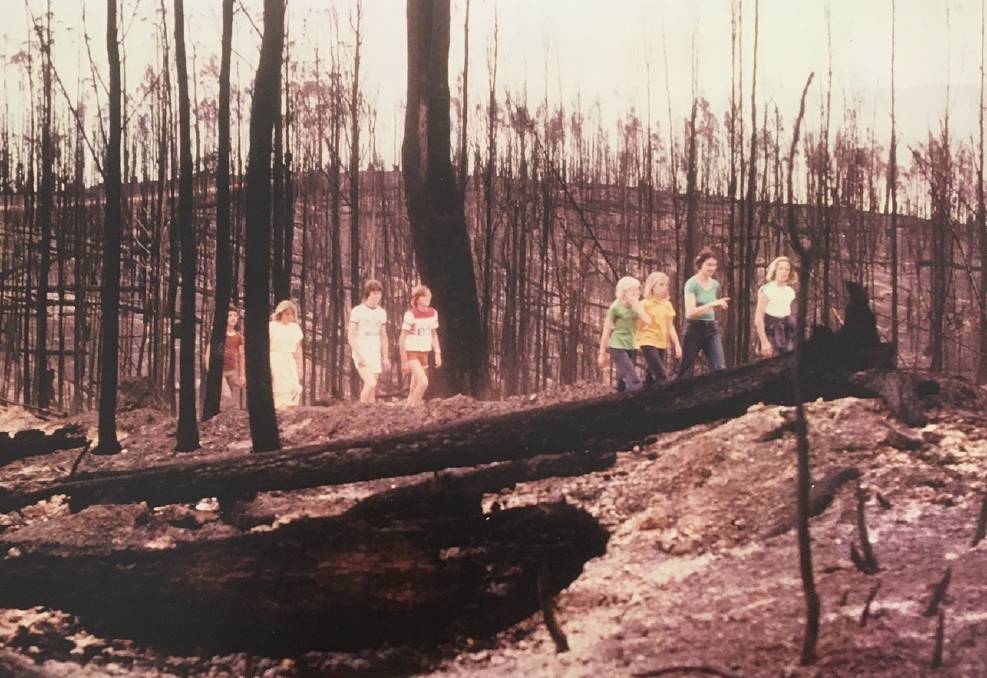 Kylie Miller, in yellow, with friends from Tanja Public School after the 1980 fire.

It was all end-of-the-world stuff and reporters and camera crews from everywhere descended on disaster zones to document it. Based in fire-ravaged East Gippsland in Victoria, Kylie - with an accomplished background in journalism - was called upon by her local community to wrangle the media.

"We were slightly less impacted than other people so they just asked if I would be available to speak to media," she recalls. "I did some of that just to take the pressure off some of the people that were really directly and dramatically impacted."

That role as community spokesperson put her in touch with Australian Geographic journalist Craig Sheather and on the path to a whole new genre of storytelling. 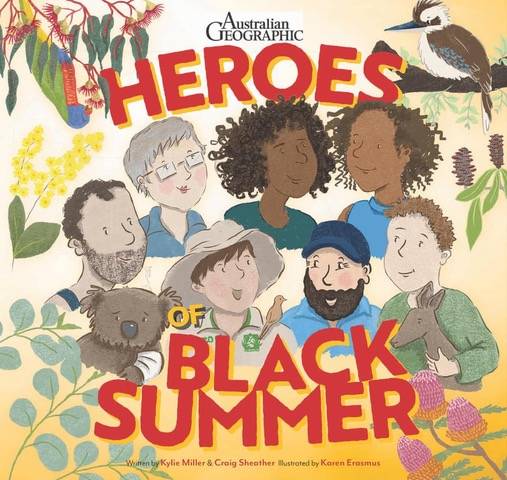 The cover of Heroes of Black Summer.

"A couple of months after he visited our property he rang me to see if I wanted to do a kids' book because he was doing a similar one based on the north-east of Victoria which was also burnt out.

"Craig, who has small children, had been told by a clinical psychologist that it was really beneficial for children to be able to talk about the impact, what they'd been through, the trauma of it all, and to be able to also see some positives in the experience."

Partly funded with a grant from the Gippsland Primary Health Network, and gently illustrated by Karen Erasmus, the book is a distillation of the courage, compassion and generosity borne out of the fire. 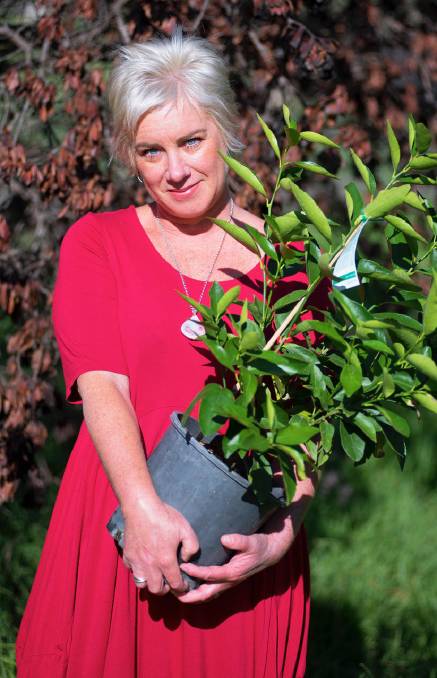 Kylie Miller with the lime tree donated as part of it a pay-it-forward scheme. Photo: Australian Geographic

"One of the things I found during the fire was that I was crying a lot and it actually wasn't particularly bad crying, it was overwhelmed crying because of the generosity," Kylie says, her voice trembling.

"We just had people coming out of everywhere to help us. People going out into the bush to rescue wildlife, people setting up nesting boxes, truckloads of hay that were rolling in from all over Australia to help the fire-affected farmers, warehouses full of donated goods."

One of those heroes was the man who dropped into the Nowa Nowa general store to buy a bottle of water, handed over a $50 note and told the shopkeeper to keep the change as a donation. That became the start of a pay-it-forward scheme.

Kylie visited the store and picked out a lime tree to plant on her hobby farm at Wairewa, where the orchard had been burnt out. When she went to pay for it, she was told it was a donation. The tree is now thriving, a potent symbol of regrowth and renewal. 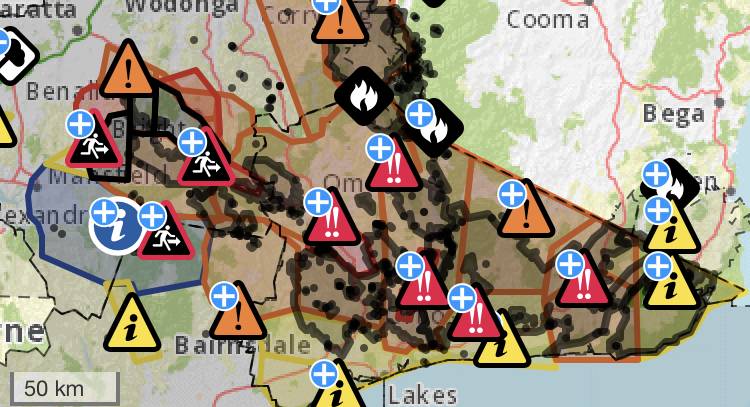 Victoria's East Gippsland at the height of the Black Summer emergency.

"One day it will be giving limes to my gin and tonic and I think that's positive."

Finding heroes to populate the book was easy. Choosing which ones would make the cut and telling their stories in a way to engage children, that was the challenge.

Kylie had something of an advantage relating to children who'd been through the bushfire trauma. As a 12-year-old growing up in Tanja, near Bega on the NSW Far South Coast, she'd been evacuated as fire bore down on the family farm.

It was 1980 and her father was on the fire front with the Rural Fire Service while her mother was protecting the family home. Kylie and her twin sister had been sent to a nearby property initially thought safe. 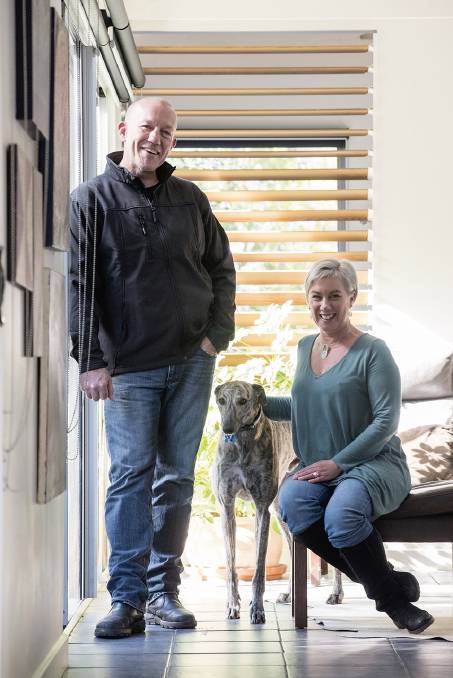 "I remember it clearly because it was my birthday. We were sitting around the table with our friends from Tanja Public School when we were evacuated again. We had to leave the birthday cake there and my friends' dog ate it."

She also remembers the uncertainty. There were no mobile phones and no internet. Calls made to landlines were the only way of knowing if your parents were safe and if you still had a home to go back to.

As Kylie sees it, the constant evacuations were probably as unsettling for the children of the Black Summer as the fires themselves: "Not knowing if you were going to come home and you'd still have the horse in your paddock or the chooks would be alright because they couldn't go to Grandma's with you".

Her friends told her about the difficult conversations they had to have with their children about which toys they'd be allowed by take with them as they sought safety. Kylie as a young reporter for the Bega District News in 1989.

Although she counts herself lucky - her farm at Wairewa was burnt but the family home was not - Kylie, like everyone caught up in the Black Summer fires, is still coming to terms with the experience: "This was clearly bigger than anything anyone had seen before. We had seven immediate family properties directly under threat at different times through the summer".

While writing the book brought back those memories, it was also cathartic. For bushfire survivors around Australia, the opportunity to process their Black Summer trauma was put on hold because of COVID.

For Kylie, Black Summer Heroes has led to new children's book projects, including one about her beloved rescue greyhounds. For the ex-newspaper reporter who cut her journalistic teeth at the Bega District News before working at the Newcastle Herald, The Age and Bangkok Post, as well as Prime news in Canberra, it's a whole new chapter in a life of storytelling.